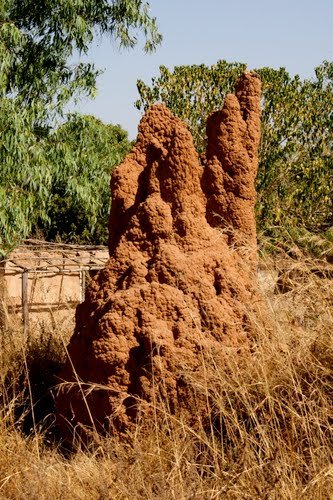 Termites play an important ecological role in many ecosystems, particularly in nutrient-poor arid and semi-arid\environments,and indeed ,Termites play another important role which is by recycling dead and decaying wood which also play a great role for agricultural land.

Mound-building termites or just mound builders are a group of Termite species that live in mounds. This group of termites live in Africa . The mounds sometimes have a diameter of 30 metres. Most of the mounds are in well-drained areas.

Termite mounds usually outlive the colonies themselves. If the inner tunnels of the nest are exposed it is usually dead. Sometimes other colonies, of the same or different species, occupy a mound after the original

Research indicate that ,The structure of the mounds can be very complicated. Inside the mound is an extensive system of tunnels and conduits that serves as a ventilation system for the underground nest. In order to get good ventilation, the termites will construct several shafts leading down to the cellar located beneath the nest. The mound is built above the subterranean nest. The nest itself is a spheroidal structure consisting of numerous gallery chambers.

They come in a wide variety of shapes and sizes. Some, like Odontotermes termites build open chimneys or vent holes into their mound

worker termites tunnel 50 metres or more from the nest in search of food. If they come across your home’s foundations while they are foraging, they’ll follow any cracks or crevices to gain access to a food source such as floorboards or any other susceptible timber. They may even enter through wood in direct contact with soil or build mud tunnels from the ground to the lowest accessible timber. From there they can access the rest of your house, including the structural timbers in the walls and the roof. For an extreme example of the mud-building technique, just think of the huge termite mounds in the Northern Territory.

You are unlikely to ever see a termite, only the signs of their presence. Their mud tunnels are the most obvious, but in spring and summer you may also come across the piles of wings left behind by swarming termites as your local nests send out prospective new kings and queens to start new colonies.
Its clear that each Each termite has its own job, making cohabitation a breeze for these social insects.
•Workers. Workers are blind and wingless. Their job is to make sure all the other termites are taken care of by providing food and water, digging tunnels and taking care of the nest.
•Soldiers. Soldiers guard and protect the colony from outside intruders, like predators.
•King. The king’s duty is not as glamorous or complex as you might think. His only job is to fertilize the queen’s eggs.
•Queen. The queen is the largest in the termite colony, and her main job is to lay more eggs. Termite colonies can produce tens of thousands of eggs a day or hundreds of millions in a lifetime!
The major soldiers guard the entrances to the mound, while the smaller soldiers guard and defend the workers. All soldiers are sterile females.

The termite species kept by zoos collect grass, hay, straw and vegetable litter. Food is processed colectively in the mound using the symbiotic fungus Termitomyces sp. The termites feed either on the plant material or eat the fungi as a source of protein.

Priodically winged reproductive animals are produced alongside the sterile brood. The reproductives fly out of the nest in thousands, and after shedding the wingspair up to found new colonies.

Termites undergo a metamorphosis with three developmental stages: egg, nymph and adult. The eggs hatch into nymphs (the first instar) that are fed by the workers, and these nymphs then moult several times, differentiating into worker, soldier or reproductive forms. Development into adult forms takes several months, depending on food, temperature and the size of the colony. 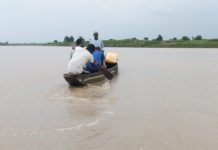 The need to Plant more trees to combat desertification and climate...