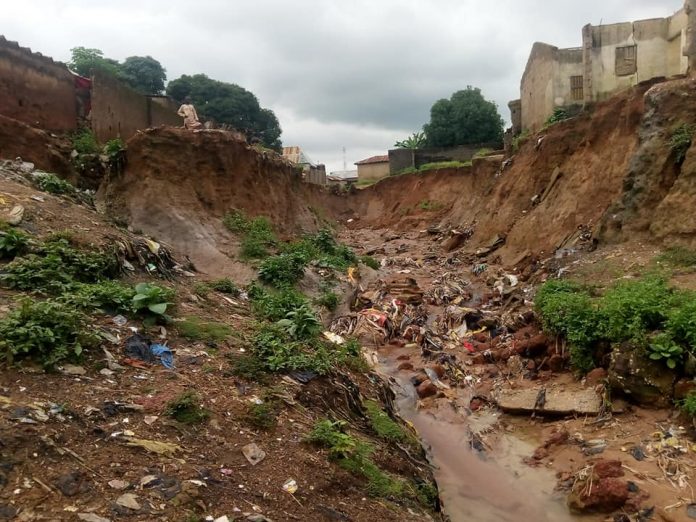 During a one day Visit to unguwar ‘yan kilishi at Rigasa ,Igabi local government kaduna north western Nigeria by Team of African Climate reporters ,it was observed that many houses were Collapse as many residence were force to migrate as a result of gully erosion that is destroyed the community.

The community has called on Kaduna state ministry of environment, KEPA ,SEMA and all Humanitarian organization to came to their aid, so as to tackle the situation before it become worse.

According to one of the residence Mallam sani musa,he says every year, Gully erosion destroyed houses in the area,yet no any NGO/CSO or government ministry shows concerned.

He then appealed to kaduna state government to help them search for ecological fund,so as to halt the situation.

The community is right in the heart of Kaduna metropolis and the inhabitants felt abandoned as they battled to save their houses from getting destroyed by gully erosion.

it was also observed that many houses and rooms belonging to the residence were taken away by the erosion.

Gully erosion is a big threat to the existence of residence in the area,

Another resident Sagir shu’aibu also says,there is need for quick intervention by state government, in other to halt the situation while stressing the need for kaduna state ministry of environment to show commitment in tackling all environmental challenges disturbing communities

It could be recalled that last year, Developmental reporters ,African Climate reporters ,and other National and international journalists has visited the community, and series of report has been taken, yet there is no any reaction by kaduna state ministry of environment and KEPA.

The resident then begged kaduna state Government to comes to their aid,as Hundreds of houses are been threatening by the erosion.

Meanwhile the director African Climate reporter Dr piman Hoffman says ,there is need for state government to quickly respond to the situation in the area,

Hoffman said, during our visit we saw how the gully erosion causes serious damages to the area, and it shows clearly that annually many habitants have to migrate to another area due to how the erosion is destroying their community.