According to a renown environmental expert/activist Mr. Emmanuel Bonet of Aid Foundation, “the Green Hangout Kaduna 0.1 is the largest gathering of climate change and environmental practitioners in Kaduna” while appreciating the effort of Green Climate Africa for the thought of bringing practitioners together in such a huge scale to rub minds, talk about common grounds and way forward.
The program which had more than 100 participants across Kaduna State, had about 11 Climate Change media reporters, 3 PhD students, 7 Masters students, 32 Climate change and environmental organizations, 5 Pastors lead by the popular Kaduna base Pastor, Yohanna Buru who spoke on the role of church in fighting climate change, 3 government MDAs and other Climate Change Activist.

The program of event was of two sessions, first session which discussed the topic, Climate Change and Insecurity: A case of Boko Haram and Banditry in Nigeria, had four panelist and a moderator. Among them is the Chairman, Lere Local Government Area who doubles as the Chairman of the Association of all Local Government Chairmen in Kaduna State. He spoke extensively from the perspectives of local governance with respect to the subject matter. Others on the panel were private sector leaders and security consultants and experts. The session was moderated by a Geopolitical consulting strategiest, Mallam Jibril Adamu Seze.
The second panel was made up of 5 panelist which was moderated by the Team lead, Skill-Up-Arewa, Amb Bashir Babatunde Abdulganiyi. The panel discussed, Climate Justice: How far so far? Doing justice to the topic were climate change activist, experts and enthusiasts whom have been working in the space for a while. While the frank deliberation took place, we had on the sideline activists like Ibrahima Yakubu of the Africa Climate Reporters, who works with DW radio (Germany) Gloria Kasang Bulus of the Bridge the Gap, Barr. Suleiman San, Company Secretary of the Kaduna Markets Board and a freelancing Nature-photographer, representative from the State Ministry of Environment and Natural Resources, Mr. Nyam Maikano Gura, a Climatologist who heads the Climate Change Unit in the ministry and other renown environmentat practitioners. 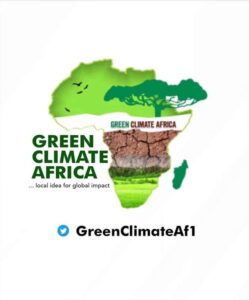 The highlight of the program is an award presented to Mr. Ismail Umar Dikko for planting more than 10,000 trees within Kaduna metropolis in three years from his pocket. While many thought the trees and flowers planted along roads in Kaduna town is a project of the government, only few knew that it was a personal contribution of Mr. Ismail who is the DG of the Kaduna State Urban Planning Development Authority. It was a Meritorious Award to encourage others to do same if not more.
From the positive feed back Green Climate Africa got, it has since resolved to have such Hangouts periodically to raise awareness amongst practitioners, government and private sector on contemporary challenges and solutions to the fight against climate change.
Rport on the outcome of the event will be made public soon.
Yusuf Idris Amoke
Executive Director
Green Climate Africa.
United Nations Development Programme – UNDP UNDP in Nigeria Goldman Environmental Prize Renewables and Environmental News UN Climate Change The Climate Council Yale Program on Climate Change Communication World Climate Research Programme YuWaah – Generation Unlimited India Nigeria Climate Innovation Center Nigeria Youth Climate Network #MinistryofEnvironment #climateaction #UNDP #environment #greenhangoutkaduna #greenclimateafrica

Role of youth toward using sport in combating climate change and...