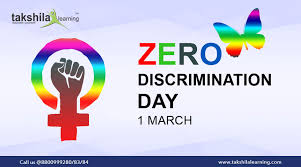 A head of world international -zero –discrimination- day ,An international interfaith specialist Hajiya Ramatu Tijjani has called on Africans , Arab,and Europeans to shun all forms of differences and discrimination based on Physical appearance, Invisible Disability, race ,Name discrimination, ethnic,religion , norms and cultural difference in order to move the world ahead.

According to her Zero Discrimination Day is celebrated globally on 1 March every year ,and the aims is to raise awareness on the importance of tolerating each other irrespective of tribe, culture and ,continent,. so that everyone lives life with dignity regardless of age, gender, ethnicity, skin colour, height, weight, regional difference.

Ramatu who is the founder for the foundation for the protection of women and children in Nigeria, and specialist on Peace and conflict resolution in Africa stressed the importance of uniting the people and promoting the culture of tolerance,peace building, better under standing among different faith base organization across the continent.

Adding that we must join hand together with every one without looking at his tribe,culture and religion ,race and color to end discrimination world wide in order to make the world a living place for everyone.

“In-fact Discrimination among human destroy the world,hence the need to shun racism,differences among nations”.

“We kicked against discriminating persons with disabilities,hiv/aid, corona virus, and other diseases”.

“We kicked against discrimination based on religion,region,race and ,ethnicity?

She appealed to Nigerians and all 54 countries of Africa to shun all forms of discrimination in all aspect of lives , while calling on all stake holder which include traditional title holders, Religious leaders, interfaith mediation center, state and federal Government non –governmental organization and civil society organization that promote peace and unity ,to equally make used of the international day through sensitizing the general public on the need to be law abiding citizens and shun all forms of discrimination in Nigeria,and the entire African nations.

The specialist called on media organization to create more programmed which would educate citizens ways to live with one another irrespective of his religion , tribe and cultural background.

“We are created by one God,and we are both from Adams and Eve, we must stop stigmatizing,discriminating and showing difference among human being”

Additionally,she called on Human right organization to take more campaign to schools and terciary institutes to sensitises youth’s and children ,so as to educate young once the importance of unity,love and forgiveness

“The symbol of Zero Discrimination Day is the butterfly. Firstly, on 1 March, 2014 the UN had celebrated this day.”. She said, her organization is taking the campaign to holy places of worship,football view center,