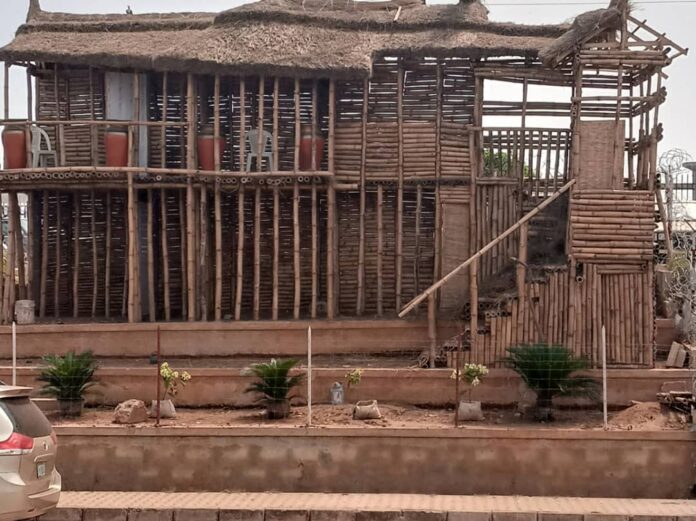 As part of innovations to solve housing problem in Nigeria, a horticulturist is constructing houses using bamboo trees that can withstand the global warming and ecological challenges.

Already, the Horticulturist has trained hundreds of jobless youth in a new sustainable technology in constructing cheapest houses with Bamboo trees that can withstand all forms of ecological challenges including flood disaster , earthquake and Hurricanes 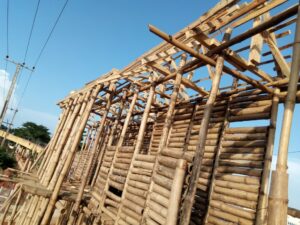 Mallam Ibrahim salisu who is the founder of Teku international farm Kaduna says the ompany has embarked on training and teaching of youths the new innovative technology of constructing latest houses in the town with less –expensive money that can equally withstand Global warming and other ecological challenges be deviling the environment.

In an interview with newsmen in Kaduna on Monday, Mallam Salisu he is currently constructing an up-stair house with Raw-Bamboo trees at the center of kaduna which would attract thousands of tourists and foreigners from other parts of the world to come and see the creative designs of a bamboo up -stair -House that is cheap in constructing which can last for over 200 of years without any fraction.

According to him, Bamboo is destined to play a major role in the green revolution as more people and businesses choose to build with this versatile, sustainable building material, adding also that they are creating amazing bamboo structures for Schools hotels, hospital, homes, stadium and even bridges.

‘The contains 6 rooms, 2 toilet,2 kitchen and it cost 600,000naira TO construct, stressing that the houses dosent required big place to build”

“Bamboo creative- design- building raises hope for future infrastructure home and for the poor to be constructing their own houses with less cost in both rural and urban centres across the country.

we must know that Bamboo trees are very strong, tough and more than the forest wood from trees we use when constructing house”

“it is clear that they are naturally Eco-friendly and one of the fastest-growing wild grasses on earth, as It reaches heights of full maturity in as little as three years and regenerates quickly after harvesting”

Stressing also, that aside from bamboo’s rapid growth rate, the production of bamboo also yields benefits to the planet.

A complex root network anchors the soil down, preventing erosion when rain or flooding occurs.
It also helps the soil retain water, aiding in moisture regulation throughout the rainy and dry seasons. Bamboo also absorbs more tons of CO2 than trees, due to its extreme growth rate.

The houses constructed with bamboo, used to be cool, while during cool season, it makes the houses warm.

Ibrahim explained that Bamboo trees is the cheapest way of building houses,that can stand environmental challenges, which include desertification, deforestation, Guilly erosion, and Global warming and other environmental factors that are responsible for making people abandoned their farm residents of farm land.

“The house is cheap, tough, strong and can equally last more than the normal building in town.

Bamboo trees play important role in the environment because they help to lower the light intensity and protect against ultraviolet rays.
He then advised people to embrace this kind of modern house construction to avert scarcity of houses in both rural and urban cities.

Responding, Director African Climate Reporters, Comrade Nurudden Bello who has been visiting the project since the building took off, says one of the best ways to reduce global warming is to embrace the concept .

Environmentally, he noted, bamboo reduces the use of timber consumption in construction as expressed, it naturally has a waxy surface which does not oblige paint and this makes it free from health-hazards brought about by paints.

Bamboo represents a great resource for eco-friendly buildings: thanks to its rapid life cycle (it takes it from three to five years to regrow, while other plants generally need fifteen), it is suitable for a building market increasingly respectful of the Planet.

Nurudden who is a science-climatologist says Bamboo forests are very friendly to the environment.

He then called on people to stop bush burning, while urging every one to use the raining season toward planting trees.

The scientist said that desertification, deforestation, and the extraction of natural resources have forced millions of wild life including human being into migration and hence the need to halt cutting-down of forest trees,to avert migration of zoonociess diseases from animals to human.

While calling on federal and state governments to enforce a law on charcoal and firewood business,he equally called on local bakery houses to embrace modern day of baking to halt consuming forest trees. 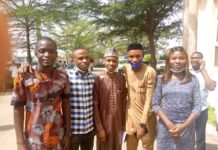 Shifts in Malaria Transmission Due to Climate Change affecting Africa