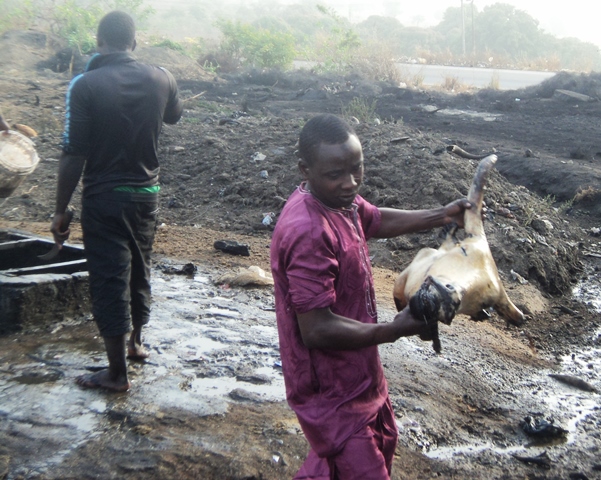 KADUNA, North-West, Nigeria – In Nigeria today, climatic scenarios is common in almost all the geopolitical zones of the country due to constant climate change. Climate change is a global issue calling for urgent attention, with Nigeria as one of the most vulnerable countries to the harshest impacts. Nigerians are feeling the burden of climate change in their everyday lives, whether directly or indirectly. Climate change is caused by both natural occurrences, and mainly by human activities on the environment.

According to researches, Nigerians are said to be meat lovers , however, the act of processing slaughtered over a million animals monthly for onward delivery to consumers is a major concern. And to worsen the situation, slaughter houses in the country constitute the highest pollutants of the atmosphere.

In a recent research by a Kaduna based nongovernmental organization, African Climate Reporters, on Slaughter houses in the country using Kaduna State in North-West, Nigeria as a case study, revealed that about 2 million automobile tyres are used monthly by butchers to processed animals slaughtered in facilities.

This hazardous practice by butchers, experts disclosed has negative impact on the environment, emissions from burnt tyres causes air pollutants which in turn poses a serious threats to human health, animals plants and environments because tyres are not designed to be burnt as fuel for processing animals for food. This is because it contains hazardous ingredients. The rubber in tyres contains 25 per cent extender oils derived from Benzene, 25 per cent Styrene, a derivative of Benzene, and 25 per cent 1.3 Butadience.

With Nigeria rearing about 200 million livestock, and over 1.9 million of these animals slaughtered daily for consumption, this has triggered climatic changes in the country.

Similarly, the poultry industry which is one most viable and popular agricultural business industries in Nigeria is not left out, as this has become a means of livelihood in both the rural and urban communities in Nigeria. According to researches, the industry directly and indirectly employs about 25 million people. However, activities of poultry production do contribute negatively to climatic changes in Nigeria, and these could be through the following: Manure disposal, Disposal of Mortalities, Ammonia release ad Methane, CH4, Produced by Microbial activities, Nitrous Oxide Biomass and from Nitrogenous fertilizers e.g manures, and Shallow river contamination.

Again, deforestation of virgin lands in Nigeria for cattle grazing reserves which is thriving in the Northern region of the country is a cause for concern. With over 8.4 million hectares of land appropriated for the purpose of grazing reserves, in some northern states like Sokoto, Zamfara, Bauchi, Katsina and Ilorin has increased climatic changes in the country.

Nigeria currently is experiencing a warm climate, hotter than her neighbors, with the likes of Zamfara, Kano, Sokoto, Katsina, Bauchi, Gombe, Kebbi, Borno and Yobe, were pastoralists rear and graze their cattle experience high temperature, low rainfall and desertification.

Due to deforestation, trees which should serve as cover for soil against the harsh sunshine, are felled indiscriminately, thereby, exposing soils and reducing soils productive capacity. Heat-related incidents are on the rise, as well as heat stress, because of increasing greenhouse gas emissions in the country.

To buttress this point, Head of Department, Animal Science Institute, Ahmadu Bello University Zaria, Dr. Fatima Bukar Biu, said an acre of tree plantation would absorbed six tons of carbon dioxide and give out four tons of oxygen. She added that shrubs and turfs absorbs pollutants like carbon monoxide, sulfur dioxide from going to the atmosphere, as well as reduce the intensity of greenhouse effects.

Greenhouse gas emissions by animals trigger climatic changes in the country, as researches have shown that a cow releases an average of 70kg to 120kg of methane per year. The negative effect of methane on the environment I higher than carbon dioxide, so rearing over 19.5million cows and other livestock, and each cow discharging about 100kg of methane doubled more than carbon dioxides cars in Nigeria emits.

The problem of rainfall caused by climate change, has forced herdsmen in the far north to move down south in order to feed their cattle on farmers’ produce. This has fueled conflicts between the duo and has always resulted to loss of lives and wanton destruction of investments in states like Benue Taraba, Nasarawa, Ogun, Southern Kaduna, Enugu among others.

According to Dr. Biu, as Lake Chad is receding fast inhabitants are moving towards the Guinea Savannah region, Middle Belt of Nigeria thereby putting pressure on the already depleted forest reserves in that region. The migration has further heightened climate change which in turn takes is toils on livestock resulting diseases and mortality.

According to Ministry of Environment, (ME), 2003), in Nigeria, emission of Green House Gases, (GHGs) is generally based on low per capita energy and other resources consumption in the country. However, as pointed out by ME, GHGs emission is expected to rise as a result of increased numbers of livestock and high population growth rate with corresponding increase in per capita energy and other resources consumption.

Therefore, to mitigate CO2 emissions, State ministries of environment should encourage the planting and maintenance of a number of fast growing, carbon trapping trees on animal rearing concentration areas, and even on busiest streets across major cities within the state.

Also, to mitigate CH4 emissions government should support waste management in all the states in Nigeria to have a sequel structure to safe disposal of organic matter from cattle by herdsmen.

Government at all levels in the country should educate and enact strict laws to ensure that people comply with this for small, medium and large scale livestock. There is also the need for government to educate citizens on their lifestyle and eating habits. Nigerians should consider farming environmental friendly form of animal rearing that is less hazardous to the climate.

Climate change is a serious threat to Human being, Animals and...