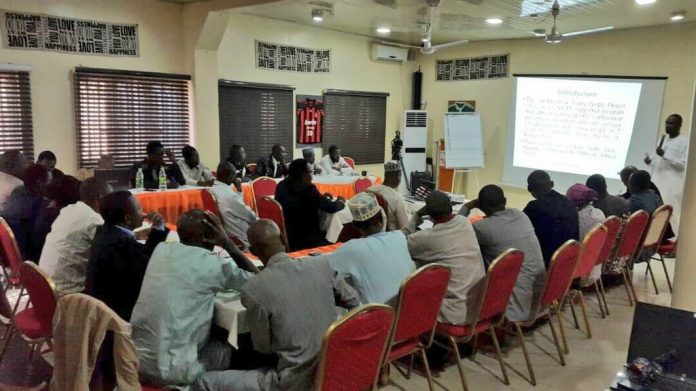 Unicef,WHO, National and international NGOs and CSOs has been contributing their quato toward the daily battled which is aimed at reducing the scourge of HIV/AID spread among adolescents ,youth ,pregnant women across the 36 states of Nigeria.

Dr. Baba disclosed this at a media meeting in zaria –kaduna north western Nigeria on Prevention of Mother to Child Transmission (PMTCT) and Adolescents and Young Persons (AYP) support in Kaduna State.

The 3 days meeting was organised by the National Orientation Agency (NOA) with support from UNICEF on Prevention of Mother-To-Child Transmission and AYPs support on HIV/AIDS in the state,which is aimed at strengthening the fight against HIV/AID in Nigeria,and also to dialoque with all stake holders ,so that they can also support humanitarian NGos /CSOs and federal government in the daily battle to reduced the spread of the virus among adolescents children that are residing in both rural and urban centres across the 36 states in the country.

He note that 80 per cent of pregnant women with HIV were now receiving effective treatment as a result of which the number of new infections in children had been reduced by one third; from 270,000 in 2010 to 180,000 in 2017.

There are huge success leading to the reduction of HIV/Aid transmission among little childrens across the country,this is simply because of the level of awareness that is spreading across the Nation.
He said the proportion of children receiving antiretroviral therapy (ART) had doubled from 22 per cent in 2010 to 52 per cent in 2017, and lamented that millions of women, children and adolescents were still not being reached.

“An estimated 1.8 million adolescents aged 10 to 19 years were living with HIV worldwide in 2017. Only 1/2 of HIV-exposed babies are tested for HIV within the recommended time period, while three million children aged 0 to 19 are living with HIV and half (52 per cent) of children under 15 are accessing ART,”.

He said drivers of the epidemic among adolescents and young persons in Nigeria included behavioural, socio-economic, traditional, religious, cultural factors, among others.

“We want media to drive discussions on different platforms on how AYPs would make the right choices in life to avoid contacting the dreaded disease. “We want AYPs in Kaduna state to know their status, so that those that are positive could be placed on treatment to avoid spreading the disease and those that are negative could remain negative. “We also want stories and programmes that will help check the transmission of HIV/AIDS from mothers to children,’’

“we must join hands with every stake holder in Nigeria, if we want to win the battled,so as to save our childrens”

According to him, government and relevant stakeholders must redouble interventions if the scourge among this vulnerable group must be address.

He further emphasized that Journalists should ensure that adolescents are targeted with adequate and useful information on HIV/AIDS in order to curb the menace and stay safe.

Yusuf, who was a former Managing Director, Kaduna State Media Corporation, said: “Right information from the media will help AYPs say no to unsafe sexual practices and other destructive tendencies.

“The key issue is to encourage APYs to abstain from sex till after marriage, and play safe sex if they must. “Therefore, the media has a role to play in influencing the choices AYPs make through stories and programmes that particularly focus on challenges affecting the age group AYPs.”

She also called on media outfits to project positive images for AYPs to emulate and motivate them to dream big and remain focus on their goals to succeed in life.

while calling on journalists to add more effort in writing developmental stories,she then urged media practitioners to immensely encourage reporters to be reporting news relating to maternal and infant mortality in the country.

On his own part, Dr Farouk Chiromari, Child Protection Specialist and Consultant, described adolescent and young person as persons between 10 and 24 years of age. Chiromari said that the rapid physical growth, development and sexual maturation among this age group make them vulnerable to HIV.

“At this age, the adolescent develop unhealthy habits that grow into a problem that may affect them in the future. “This is a period when sexual feelings became high, overwhelmed with thought about sex, and attraction to the opposite sex makes them highly vulnerable,’’

he said According to him, without proper guidance, teenagers may become sexually active before they are ready, adding that awareness is the only way to prevent early pregnancies and sexually transmitted infections among adolescents.

Earlier ,the Kaduna State Director of the National Orientation Agency, Zubairu Galadima-Soba in his own remarks urged the Nigerian media to help in shaping the attitude of Nigerians towards sustaining efforts to bring the scourge of HIV/AIDS to barest level in the country.

He said “I appeal to the media to sustain current efforts and open new vista to ensure that the transmission of HIV/AIDS is brought to tolerable levels or even wiped out”
“NOA believes that shaping the attitude of Nigerians is important in achieving the set goals of addressing HIV/AIDS in the country”.
Galadima further pointed that the issue of health remain critical to the progress of individuals, society and the country, as such the media ought not only set the agenda, but also ensure that all stakeholders including individuals “perform their bit without prompting.’’

We want media to drive discussions on different platforms on how AYPs would make the right choices in life to avoid contacting the dreaded disease.

We want AYPs in Kaduna state to know their status, so that those that are positive could be placed on treatment to avoid spreading the disease and those that are negative could remain negative.
We also want stories and programmes that will help check the transmission of HIV/AIDS from mothers to children,’’

He commended the contributions of the various media houses in Kaduna state in the campaign to encourage communities’ access health care services and especially in sensitising adolescents and young persons’ to avoid risky sexual behaviours to insulate themselves from contracting the disease.

Meanwhile The United Nations Children’s Fund (UNICEF) expressed confidence that Kaduna State would end all new cases of mother-to-child transmission of HIV/AIDS by 2020.

UNICEF’s Chief of HIV/AIDS in Nigeria, Ms Dorothy Nbori-Ngacha, said this shortly after her team’s meeting with the Kaduna State Executive Council at Government House, Kaduna.

Nbori-Ngacha explained that to achieve the target, the state intend to reach 90 per cent coverage, where all pregnant women in the state would have access to preventive services.

She said that the state government was committed to achieving the target, considering the huge amount of resources released for HIV response.

The official explained that she was in the state to brief the council on what UNICEF, in partnership with the state government, was doing to address the scourge of HIV in the state.

She called on the media, communities, families and relevant stakeholders to join hands with UNICEF in ensuring that these adolescents are found and treated.