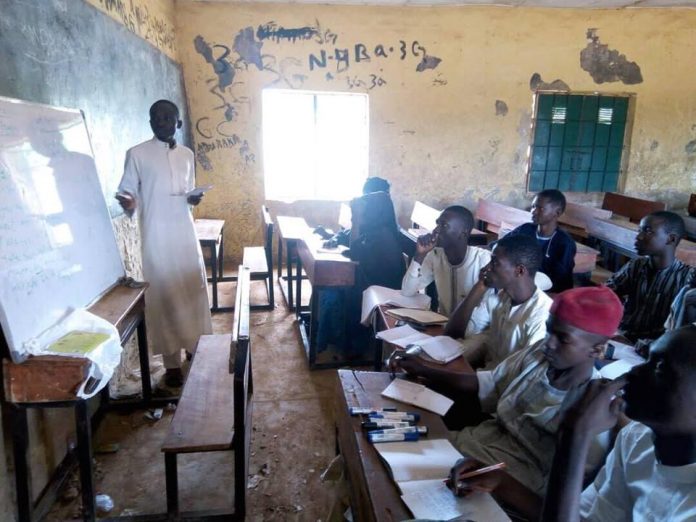 The chairman Rigasa students Association(RSA) comrade Yunusa Bala Mohammed says the reason for organizing the one day lectures about climate change is to sensitizes the school students on various ways to be acquainted with all environmental issues related to climate change,so that they too can gives their own contribution toward reducing the global burden that is affecting all human aspect of live.
According to him climate education gives children and young people the knowledge and skills to make good decisions about how to adapt individual lives and ecological, social or economic systems in a changing environment.

He stated this during delivering his lecture at the school premises ”Markaz” at Rigasa ,Igabi local government kaduna, North-western Nigeria ,which he says climate education is an essential component and a catalyst for responding to global climate change,and that school children has a role to play toward reducing the global burden of global warming that is affecting all aspect of human ,Animals and even the aquatic lives,
According to him Education plays a vital role in bringing about behavioral change, and schools can play an important part by becoming carbon neutral, energy efficient and reducing their own ecological footprint.

The school has been training and training most of the community students and school drop-out ,with married women various private lesson which is aimed at promoting the education and encouraging those who abondonned school to go back to school,but this is the fisrt time,they introduce issues related to climate change.
“we must educate them about all issues related to global warming and their environment,so that they too can gives their own contribution in the fight against climate change that is affecting all aspect of human lives including the wildlives”

Bala added that education furnishes the technical knowledge needed to build a better future through innovation — one that includes clean and safe energy, sustainable agriculture and smarter cities
Furthermore, he note that,the importance of climate education to the students cannot be over emphasized, seeing the fact that they can also contribute their own quota in many various ways to save their environmental against all forms of challenges,

He then called on federal ministry of education to introduce climate change education at primary school,secondary and terciary instituted,while appealing to to non governmental organization on climate change and environment to triple-up effort in the fight against global warming and fight against desertification and deforestation.

Bala says,the association has been organizing private lesson to most of the student of Rigasa community ,including organizes a specially class for adult education,to most of the youth that abandoned schooling,so as to encourage them going back to school.

“he says we are team of graduate teachers and scholars from all educational aspect of life,we are the once that usually organise the private classes to all our brothers and sister, and we are the once that really thinks,its high time to introduce climate education in the private lesson we do usually organise every weekend to all our community students”

In his own message to the conference, the assistant director African Climate reporters Dr Piman Hoffman says, it is better to start teaching the young once at the early stage about climate change ,its effect and how each and every one of them can give his /her contribution in raising awareness about the issue.
He said,climate change is real and we must teach the young once how to combattre it through Trees planting, and many other ways.

Hoffman said climate change promotes learning about the causes and effects of climate change as well as possible responses, providing a cross-curricular and multidisciplinary perspective
He concluded by calling on African Union AU,UNICEF,WHO and Network of child protection organization to ensure that climate education is introduce in all schools across Africa
Students expressed happiness and promised committed in support the fight against global warming and environmental degradation