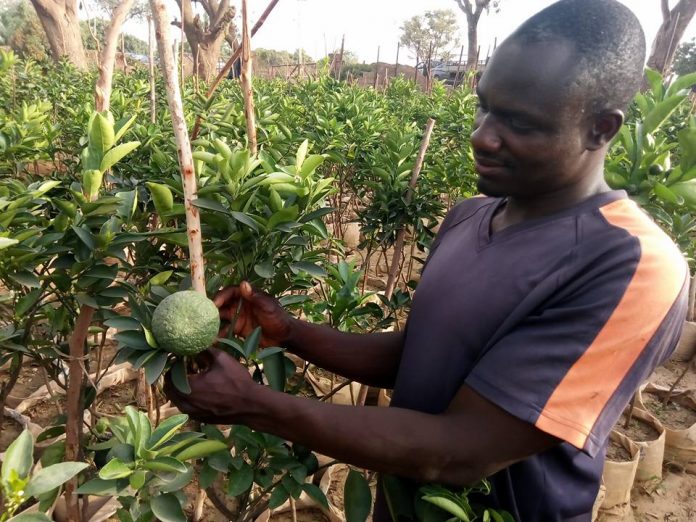 The founder of “Teko Farm international” Mallam salihu Ibrahim has reiterated his committed over the fight against deforestation ,desertification ,and climate change though continuous training of youth and school students  from various part of Africa on the importance of trees planting in the entire 19 northern state of Nigeria and Africa ,in other to halt the increasing speed of our forestry turning to sahara

Ibrahim make this known  to journalists in Kaduna that visited him during the weekend   that,for the past 20 years, he was able  to trained hundreds of Nigeria youth on various  type of seed planting skilled  and ways to protect agricultural land against of forms of threat related to environment and climatic changes,stating clearly that The rising temperatures will cause more deaths not due to natural reasons but as a result of overheating and rapid spread of deadly diseases which need to be tackling through introducing various strategies  on continuous  Trees planting campaign among Nigeria youth.

The horrifying impacts of climate change are definitely a nature’s way to indicate that the worse is yet to come and hence the need by all necessary authority to team-up and embacked on series campaign in both rural and urban centre across the entire African nation.

“weather we like it or not ,the effects of climate change can have a disastrous impact on our planet Earth. High temperatures, loss of wildlife species, increase in sea level, changes in rainfall patterns, heat waves, stronger storms, wildfires and shrinking of arctic ice are few of the dangerous effects of climate change,kaduna farmers can testify because even last week,we had them in radio and news papers complaining of shortage of water,and these are some of the sigh that we are rising awareness”

Adding that Climate change enhances the spread of pests that causes life threatening diseases like dengue, malaria, Lyme disease etc.and that  Over the last 50 years, the concentration of carbon dioxide in the atmosphere has increase by 30% due to burning of fossil fuels and greenhouse gas emissions like carbon dioxide, nitrous oxide and other gases, trapping more heat in the lower atmosphere.

He pointed out in each and every year,over 50,000 of tress and other varieties of seed spacies the farm usually produce in kaduna and half of its ,were usually distributed to other neighbouring states while some parcentage of tress goes to other neighbouring African countries that faces the problems of desertification and other environmental problems,so as to reduce the problems through planting trees

He make mension that,the reason why they enbacked on training youth and other unemployed graduate is to enabled have the skilled of tress planting,so that they can also support federal Government and non governmental organization and civil societies in the daily battle against climate change and deforestation

Additionally he note that  Above 600000 deaths occur worldwide every year due to climate change. 95% of these deaths take place in developing countries. Also Due to water shortages, the transportation of water will cause it to contaminate and make it even more deadly by spreading diseases.

“Climate change can have serious health impacts such as heat stress, extreme cold which can cause major deaths due to heart diseases hence the need by every citizen in country to join hands in supporting government,ministry NGO,CSO,development partners in the fight against global warming through trees planting at home,environment,schools,markets,Hospital,stadium, ETC”.

Ibrahim also says, Climate change is rapidly causing coastal flooding and displacement of people. Floods further cause major damages by injuring and killing people. They can even cause deadly diseases by spreading infection and vector borne diseases hence the need to team –up with all necessary authourity and continued campaign against climate change and deforestation in the entire region o Africa

While calling on government t and necessary authority to immensely  double effort in the fight, he suggested some Steps to reduce greenhouse gases  which according to him can help save the negative health impacts. He suggested Promoting safe public transportation and active activities like walking or use public transport can help reduce carbon emissions. This can also help to cut down traffic, air pollution and thereby reducing cardiovascular diseases.

He concluded by saying that ,most of the youth and students they trained are now  expert in planting Mango,Orange trees,Gwava,Cashew, and so many crops and plant that are resistance to desert and can also survived irrespective of the hashed condition of the weather

In his own remark,comrade mohammed Zakariyya director from African climate reporters says Land use change and deforestation contributes to 15% of carbon emission every year,adding that Climate change is a great topic for students to study because it integrates so many subjects: energy, environment, geography, politics, chemistry, biology, economics, and more.

Mohammed added that  In Africa  every year, large hectares  of agricultural land , usually follow the River and  go, making the owner losing the farmland and the crops  at the same time .

While congratulating and appreciating the effort of “Teko Farm international” for devoting their time in training youth different skilled and technic on planting seed and other species of trees,he then called of government to introduce a system of awarding the best tree planters of the year,according to him this will encourage more people into trees planting campaign