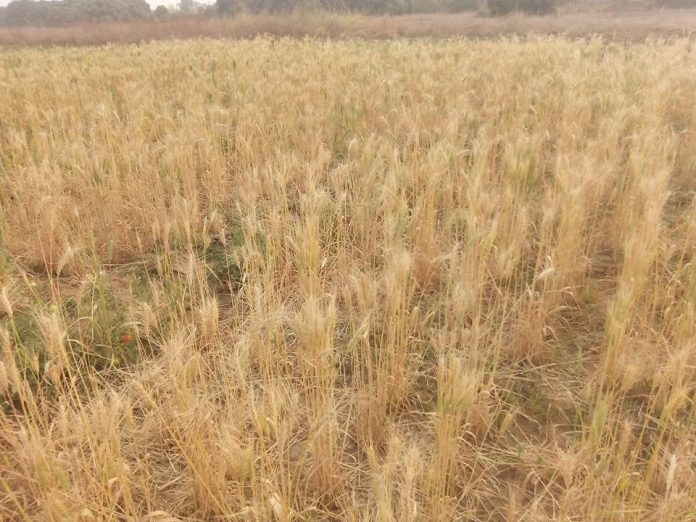 The dry season this year has come with so many challenges, as most farmers of Rigachikum ,Igabi local Government of Kaduna state north western Nigeria  complaint bitterly over the shortage of water to supply to their farm ,as most of the stream they used in pitching water were all dried,

Water is vital for all socio-economic development and for maintaining healthy ecosystems. As population increases the utilization of groundwater and surface water for the domestic, industrial sectors and agriculture exaggerate, leading to tensions, conflicts between users, and extreme pressure on the environment

Mallam Usman Ahmed Rigachikun, is one of the local farmer in the area,he described how the shortage of water is drying all their farm crops,adding that climate change has contributed immensely to the dryness of the sources of the water they used for their farm land.

Ahmed says, Majority of the wheat farmers has already abandoned their farmland due to scarcity of the water,” All our farm crops are dying due to the shortage of water and it’s a huge lost to many farmers in the area, that is why we are calling on the state government to come to our rescues,”

“As you can see we cannot do anything with the dry crops ,so we donate them to cattle breeder for their animals to eat, because there is no water, no water at all in the area”

Most of the farm crops are changing colors due to shortage of water, the leaves and the body of the crops are also drying, and this is a bad sign for wheat and Tomatoes farmers in the area this year

He further say that, “if  you check all the stream and the little well with pond that most farmers depend on during the dry season  for farming, you will discovered that they were  all dried, and  there is no any other sources of water apart from the one we depend on”

“The stream where the water do usually stay are all dry,all the well and other sources of water in the area are dried”

Another farmer in the area mr Bulus Alhassan,who has been farming  for over 20 years in the area  pointed out that apart from wheat ,we have many other crops in the area that are facing the same problems due to scarcity of water

He says plants like maize,rice,okro,ETC are all drying due to lack of water and this is making the farmers losing huge amount of money

Bulus added that ,we want government to come and construct a boreholes and other places where we will be getting water,

He said ,This year dry season is the worse of it kind,and its all because of the global climate changes that we are hearing through the radio

Meanwhile African climate reporters has called on all Nigerian local farmers to be aware of climate change ,while calling on state and federal government to find means of supporting the local farmers