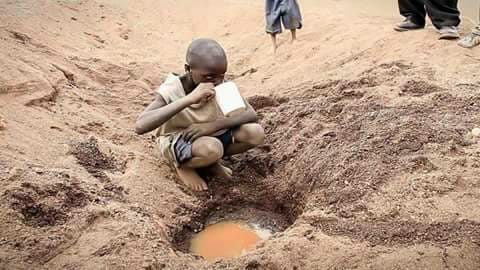 There is no doubt that ,the Shortage of clean water in Africa has been a serious problem that affect both Human and Animals,and even the little plant

indeed, According to findings presented at the 2012 Conference on “Water Scarcity in Africa: Issues and Challenges”, it is estimated that by 2030, 75 million to 250 million people in Africa will be living in areas of high water stress, which will likely displace anywhere between 24 million and 700 million people as conditions become increasingly unlivable.

Clean, safe drinking water is scarce. Today, nearly 1 billion people in the developing world don’t have access to it. Yet, we take it for granted, we waste it, and we even pay too much to drink it from little plastic bottles.

Water is the foundation of life. And still today, all around the world, far too many people spend their entire day searching for it.

The problem of water scarcity is a growing one. As more people put ever-increasing demands on limited supplies, the cost and effort to build or even maintain access to water will increase. And water’s importance to political and social stability will only grow with the crisis.

In addition, the issue of water scarcity in Africa prevents many young children, especially girls, from attending school and receiving an education.

They are expected to not only aid their mothers in water retrieval, but to also help with the demands of household chores that are made more time-intensive because of a lack of readily available water.

Furthermore, a lack of clean water means the absence of sanitary facilities and latrines in schools, and so once puberty hits, this has a more serious impact on female children. In terms of lost educational opportunity, it is estimated that this would result in 272 million more school attendance days per year if adequate investment were made in drinking water and sanitation

The World Health Organization says diarrhoeal diseases remain a leading cause of illness and death in the developing world. Every year, about 2.2 million people die from diarrhoea; 90% of these deaths are among children, mostly in developing countries.

A significant number of deaths are due to a single type of bacteria, Shigella, which causes dysentery or bloody diarrhoea. It is readily controlled by improving hygiene, water supply and sanitation. Although no vaccine exists and antibiotics may be inaccessible to many people, an effective intervention is available. The simple act of washing hands with soap and water reduces Shigella and other types of diarrhoea by up to 35%

it is clear that,

By 2025, half of the world’s population will be living in water-stressed areas. Re-use of wastewater, to recover water, nutrients, or energy, is becoming an important strategy. Increasingly countries are using wastewater for irrigation – in developing countries this represents 7% of irrigated land. While this practice if done inappropriately poses health risks, safe management of wastewater can yield multiple benefits, including increased food production